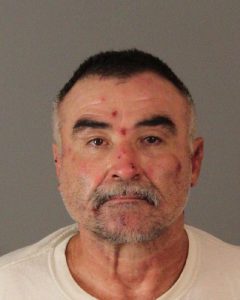 On Saturday, July 9th, 2016, at approximately 1:00 a.m., officers responded to an audible alarm at the 6300 block of Box Springs Road. The video feed showed the suspect taking items from the yard and placing them outside. Upon arrival, one suspect fled and another suspect was taken into custody. The investigation showed that over $950 in stolen items were taken. The suspect was identified as Miguel Hurtado, age 57, from Moreno Valley. After receiving medical clearance at a local hospital for a pre-existing medical condition the suspect was arrested and booked into jail.