SUSPECT IN STABBING LOCATED AND ARRESTED

Earlier today, Thursday, July 7, 2016, shortly after 9:00 a.m., officers responded to White Park in downtown Riverside for a stabbing that just occurred. They quickly arrived and were able to locate and detain the suspect nearby as he fled down an alleyway.

Their investigation determined two local transient males were inside the park when they got into a confrontation. During the fight, the suspect produced a knife and stabbed the victim several times in his upper body. The victim was able to run away and yell to witnesses to call police. He was taken to a local hospital for treatment of non-life-threatening injuries. The suspect fled the park but was located nearby by responding officers.

Jesse Gurule, 34-year-old of Riverside, was arrested and taken to a local hospital for treatment of minor injuries sustained during the initial altercation. He was later booked into jail for assault with a deadly weapon. 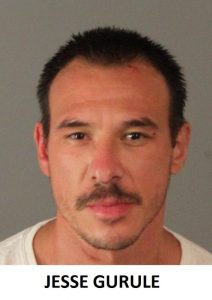